This week found tears falling once again on Paradise Lane..  I don’t remember when the first time was I met Aaron, but he visited our home on many occasions. Then August of ’09, He showed up to work for us. I have so many memories of him.  One that makes me smile was around Christmas of the same year. Mother had an electric skillet that was at least as old as me, and seemed to be nearing the brink, so I brilliantly purchased a new one for her for Christmas.. Imagine how I smiled as the old beast died about the first of December.. For once, I was going to have Mother the perfect gift. Well, there sat Aaron waiting on lunch and so Mother said, “Hey, take a look at this thing and see if you can fix it..” I’m in the background frantically pantomiming as he calming took it to the shop, dissected it, rewired it and had it ready to go.. Man.. Fortunately it died several weeks later, and this time I was able to intervene as Aaron was heading to the repair shop. 🙂

For years Aaron struggled with seizures. In the year he worked for us, He had 2 of them. The first one caused him to wreck and break his jaw majorly, and after the second one, we found his hat with in a foot of our lagoon..

April 10, 2013 Aaron was married, and he and his bride went to Florida for 2 weeks. Saturday the 27th they moved in to their new home. And at 8:00 Tuesday the 30th, Arlene discovered that life was gone.. Her husband had been had been called to his eternal reward.. 21 years old.. 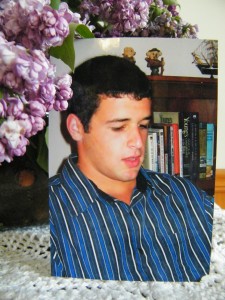 Mother found this poem and thought it very well could be written by Arlene..

Come to me in the silence of the night;

Come in the speaking silence of a dream;

Come with soft rounded cheeks and eyes as bright

As sunlight on a stream;

Come back in tears,

Whose waking should have been in Paradise,

Where souls brimful of love abide and meet;

That opening, letting in, lets out no more.

Yet come to me in dreams, that I may live

My very life again though cold in death:

Come back to me in dreams, that I may give

Pulse for pulse, breath for breath:

As long ago, my love, how long ago.

Our wisteria is going to town.. Eventually we are going to have to schedule a major pruning, but for now we are enjoying the beauty and fragrance of this amazing-yet intrusive- vine.. Thanks to Deb for the pic of the Tiger Swallow Tail.. 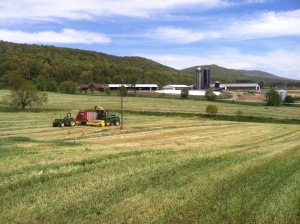 Also Praising the Lord that Springtime Harvest on Paradise Lane is complete.. 🙂 Em contributed the pic of our farm.. And I was totally impressed by the professional job done packing the silage pile.. Uncle Fred, with a little help from the boyfriend..