As many of you know, Emily’s love is emergency medicine.. I’m amazed at how often the tones drop and she’s tearing for the door.. She volunteers with our local rescue company and it doesn’t matter if it’s the middle of the night, in the midst of a party, or if she’s making supper- we have learned to realize that if they call, Emily is out the door hammer down with Danni (her Dodge Dart) on the way to make a difference. The experience she is gaining and the stories she has to tell is incredible.. Like the other night at 2200 hrs when she got out of the ambulance and was attacked by the residents guard duck named “Crackerhead” (which is unfortunately like Home Sweet Home when Father’s controversial rooster is on the loose.. Except he retires at sundown, and thankfully is penned most of the time..) So after surviving the duck attack, she walked into the house where the dog latched onto her shoe, and had to be shook off.. You never know what to expect.. except for the unexpected.. 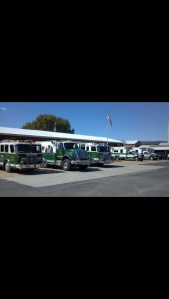 On this certian day, Kendra and Emily had evening plans.. So I sat at home, watching the clock.. waiting.. Totally oblivious to the excitement she was experiencing.. A motorcycle wreck on the mountain. Upon arrival she discovered that it was a gang of deaf mute cyclists, and one of their buddies had hit the ditch. Randomly a lady that was fluent in sign language showed up shortly after the emergency crew and took over interpreting.. I asked Em if she was an angel, and Em said she wondered.. And that she wore a big green t-shirt. (Is that angel attire?) But no matter what- this lady was a godsend to them.. So there is the ambulance, a fire truck, and most of the staff on the mountain, when the tones drop for the second call. This particular day, not many people were available to run calls, so after a quick discussion, it was decided that Emily would ride with the fire truck to meet the other ambulance with the lone driver. Down the mountain they roared. Lights flashing, sirens blaring.. and blaring.. and blaring.. Finally the driver looked over at her and said “umm, Em..” So at that point she moved her foot off of the switch that runs the sirens.. (Did you know that sirens are activated by the passenger? I sure didn’t..) They continue their decent.. and as they round the curve, they happen upon a nonsuspecting native, peacefully backing his pickup laden with freshly cut firewood, onto the road.. At this point, I’m assuming, Emily returned her foot to the siren switch.. The guy sees what’s coming, and slams his pickup into forward.. lurches forward.. throwing an entire load of wood over the road.. The firetruck bears down upon the helpless wood and sails thru at 65 mph.. unscathed.. Second miracle of the day.. Even tho it sounded like an explosion, they continued on their way, rejoicing.. All is well, except for some poor guy had to restack what was left of his days work.. And Em had another story to tell..

I used to think that I could get into recue work.. Em has opened my eyes.. So the duck would unnerve me a lil.. I’d prolly be ok at running the siren.. And I could bounce over firewood as good as anyone.. But the real heart of the work.. Getting in on life on the other side of the tracks.. Seeing our neighbors that we ashamedly hardly know at all.. And how they live and what their lives revolve around.. Being motivated enough to bail out of bed no matter how huge the day before was.. And strong enough to blaze on no matter how gory the task at hand.. It’s a real sacrifice.. To be the hands and feet of the One we serve.. I know that’s my calling too.. I’m just glad that He suits each of us for the work He has intended..

Blessings as you’re faithful to whatever that means to you,

P.S Third miracle of that day.. Em arrived in time, we still carried on with our plans, had an incredible evening, with one unusual story to tell..:)

We know some great folks from PA.. Lots actually.. Several of them got together and decided to come down this past weekend as a surprise.. I was privileged to be in on the planning.. And I wish I could post a pile of pics.. They say a picture is worth a thousand words.. But no picture shows the surprise on my sisters faces.. Going for a drive in the mountains when visibility is 15 feet.. Stressing out all day over whether the rain is going to cancel the corn maze extravaganza.. The smell of the damp of earth, the light mist, and cornfield; as I followed the tall, dark figure with the brilliant headlight fearlessly leading our group thru the maze- part of the time by the aid of a map, partly by instinct (which may or may not be fool proof.. 🙂 ).. Enjoying the campfire afterwards- the spirited discussions; the smell of the smoke; the guitar party in the background; silently thanking our Heavenly Father that the party had worked out.. That so many people had ventured out regardless of the mud and mist.. and that the owner and his “free steak dinner, customer service” rep were such good sports.. 🙂 I love it when God’s hand is so visible in small details.. See? No picture can show all that.. 🙂 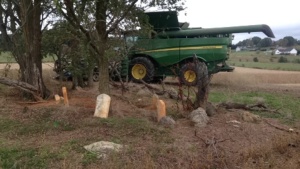 our version of “the Grim Reaper”

Last Thursday was overcast cloudy and dreary all day.. It started raining as soon as we were finished with the field of beans we were combining.. But at sunset, the sky opened.. A beautiful rainbow presented its self, and the sky was breathtaking.. As the saying goes- I’m sure there’s a spiritual application here.. 🙂 I was just ecstatic to be out enjoying the show..

8 thoughts on “Just Another Day in Paradise..”