“So where are your swans this spring?” The seemingly innocent question floated up from the back of my van.. Quickly the lady riding shotgun filled me in on the background.. 9 years ago, they purchased a pair of swans. Now swans are lifetime partners, but this couple have had their share of marriage problems. Spring time makes it worse.. During the spring they roam all over the neighborhood living on one body of water after the next. Several years ago they had a complete divorce and the drake moved down onto a neighbor’s pond and live in solitude for a number of months. I wonder what made them decide to try again, but they are working out their differences, and living together in peace.. But still moving from pond to pond.. Their owner lamented that they weren’t as docile as the Silver Lake swans who have lived out their life happily patrolling the shining waters, smiling sweetly whenever a wedding party happens to show up.. And he finished the tale with this.. “I have made the statement that I will not go and try to corral those wayward swans home from any other ponds.. I am done.. But I am currently trying to talk my wife into doing the honors..”

The glamorous swans at Silver Lake

I was in OH this past weekend, and upon arrival, I noticed right away outlaws must be a real problem out there..

Apparently the bluebird nests are under attack from the Starlings, and so this sneaky hunter was using his buggy for a blind.. Some of my passengers thought it would be awesome to lift the weapon, so it disappeared as the owners were away gather sap from the forest. I spent the night there and wasn’t expecting the Man of the House to start in on the fact that thievery had really picked up since the vanload of Virginians had arrived, and I attempted lamely to pass it off by wondering what he was talking about and outlaws and non-resistance.. I reported to my crew that they had been discovered and so while he was absent-they tied the .22 to his bird house and hoisted it in the air. Fortunately due to a tip from an anonymous source, he retrieved the gun in front of the pending snowstorm.. The next day, as we were preparing to leave the area, we stopped by his house for some maple syrup and saw the buggy blind and .22 back in position. We were very tempted to harass him a little more, but as we were nearing the buggy we realized the hunter was included.. OOoops, so we meekly went on our way, laughing.. Harmless fun.. (Since no one got shot..) 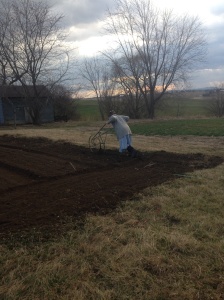 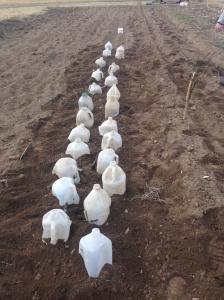 Emily got the favorite daughter status by helping Mother plant garden. The next day it snowed and snowed, and I remembered one year when Grandpappy  planted his peas and it was a blizzard the following week. We called Pappy to see how his peas were. His smart remark: “When I look at my garden, I see white-They must be blooming..”

Julia and Sherman up at Shenandoah Family Farms, touring the Plant.. Cool outfits 😉

Life tends to be a roller coaster.. Sometimes things go really good, sometimes not so well.. Sometimes things happen that make me incredibly happy, sometimes I’m really sad.. Sometimes sunshine, sometimes snow.. I’m so thankful for a God who’s love is constant no matter where I am on the journey.. This week I experienced that journey in the form of a snow storm the first of the week, and kayaking this weekend.. It was so much fun to feel the warmth in the sun! But I’ll have to confess to praying frantically to not tip during certain whitewater stretches.. No denying the water had not experienced the warmth I was feeling from the sun..

Please Sweet Summertime and the warmth of happiness-Hurry a little.. 🙂

One thought on “Of Spring Seeding, Swans, and Such..”