I have a little shadow that goes in and out with me,
And what can be the use of him is more than I can see.
He is very, very like me from the heels up to the head;
And I see him jump before me, when I jump into my bed.

The funniest thing about him is the way he likes to grow–
Not at all like proper children, which is always very slow;
For he sometimes shoots up taller like an india-rubber ball,
And he sometimes goes so little that there’s none of him at all.

He hasn’t got a notion of how children ought to play,
And can only make a fool of me in every sort of way.
He stays so close behind me, he’s a coward you can see;
I’d think shame to stick to nursie as that shadow sticks to me!

One morning, very early, before the sun was up,
I rose and found the shining dew on every buttercup;
But my lazy little shadow, like an arrant sleepy-head,
Had stayed at home behind me and was fast asleep in bed. 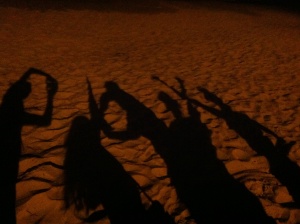 the combine in transport a sunny day last fall; shadow fun on OBX

“No shadows can come without a light making the way”

I think I’ve always had a fascination with shadows.. As a child, I remember playing shadow tag. The object of the game was to not have your shadow tromped on by the person who was “It” ..  I became aware of the different length of shadows towards evening- the shadows would be long and tag became a lot more of a challenge, at noon, it was short and fat and not nearly as easy to be caught..

And I’ll admit to having this childish notion- that as easily visible as shadows were- I should be able to turn around fast enough to see my shadow behind me.. And So I’d attempt and attempt… (Can you believe I’m admitting this? 🙂 )

I still watch shadows- as I’m on the road or in the field. I find that when my brain is not engaged- I’m subconsciously watching my shadow- how it rushes along beside me; stretching out over the median-racing over trees, and bridges and hills..

I have so many blessings in my life, but there are also  some shadows… And I don’t think that’s abnormal.. We all have difficult things that we wish to change… Sometimes shadows are self-inflicted, but a lot of times- it’s circumstances that are completely out of our control… So what to do with them? Helen Keller made the statement “Keep your face to the sunshine and you can not see the shadows…” I like that. To be so fully convinced of God’ s love, that He allows hard things to teach us lessons we wouldn’t comprehend otherwise and  to rest in His wisdom… He knows the finished product that we are working for here. .. I long for that kind of peace…  My theory looks tremendous, but in reality, I want to run from pain… To find joy in the midst of it? That’s not typical… But I’m convinced it’s possible…  I like Keller’s thought… If I focus on the Source of Light, and the end results- these temporal disappointments will fade from view..

“Dear God, please help me to be able to dance in the Shadows- like a carefree child- fully trusting that You are in Control of my life..” 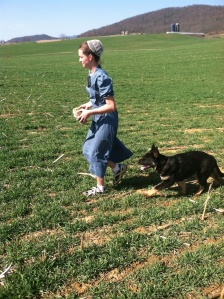 Julia has a shadow right now- Kalila has adopted Julia as her “Alpha person” and follows her everywhere. It was hilarious to watch her following Julia while we were picking rocks, Kalila “helping” by putting her paws on whatever rock Julia was attempting to lift- creating an issue. Kalila is so funny, she shadowed them to the golf course, and felt it was her duty to reach out and stop the golf ball as it rolled past.. Not the type of caddy they had in mind… Having your own personal shadow is over rated though- from Kalila’s perspective.. Last Sunday, we were over meeting Allen’s 6 week old Chocolate Lab, and when little Beretta tottered over to say hello- Julia and Sherman’s 65 lb hero panicked and ran for another room, they called her back in and she took cover, cowering behind Julia. When Beretta followed her there- She retreated behind the couch… I love how you can read a dog’s emotions…

Another Shadow in my life has been eliminated.. . After being haunted relentlessly by my dad’s rooster- Sqwack-for the last 4 years, He has been recommitted to his Creator… After he attacked Emily as she was going from her car to the house-in the garage, SOMETHING had to  happen… So to those of you who were molested by this monster- we apologize… And to my dad who is mourning- I’m sorry. Hopefully time will ease the pain… But I sure am thankful Paradise Lane is once again a free land… Thanks to Aunt Martha Ann for the pic.. 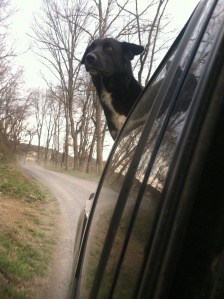 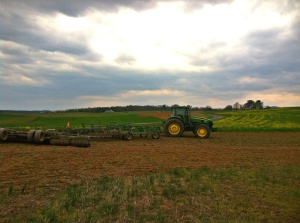 Detroit spent the day with our crew recently- as we hit the fields with a vengeance… I love watching him, he gets so excited… Pretty sure he know how to deal with the shadows… Although I’m not sure barking your head off all night-announcing to the world- because of them, is the approach to take… Maybe there’s a lesson to be learned there.. 🙂 He does take the wind in his face with out flinching.. Good ol boy.. 🙂