WEEEOoooWEEooo WEEOoo… The persistent noise shattered the stillness of our house. Bouncing of the walls and slowly penetrated into the deep recesses of my foggy brain… Instinctively I reached for my phone to shut off my alarm… As it dawned on me that this was  this was my morning to sleep in… Uh Oh.. Houston we have a problem… The noise continued. I could hear it bouncing off the walls upstairs. Since I am currently “man of the house” (in lieu of the migration to Florida by my parents) It was up to me to put a stop to our bi- annual fire drill.  Somehow our smoke alarm system only has batteries go bad and erupt with this shrieking in the night-time hours. I was convinced that to be the problem and was sorely tempted to pull the battery nearest my room and head back to bed. But really- how sad would that be for the fire department to come upon my crispy remains clutching a smoke alarm battery… So the quest continued. The house was dark-and other than the sporadic alarm- silent. I was convinced there was no fire- but just for good measure- I called to the barn to ask Julia if I could live with them if the place went up in flames. Satisfied, I pulled the offending battery and returned from whence I’d come… And the chirping began. Every minute and a half from that offending smoke alarm , this little niggling chirp. Sigh… I got out of bed again to investigate. There were two wire running from the ceiling mounted on to a little plastic piece that I was pretty sure I could break off without any trouble… Some days I can wake up really rapidly and be ready to roll asap. This apparently was not one of those mornings, but the thought did  register that it was going to be a lot harder to replace the entire alarm versus figuring out how to ignore the chirp… So I let it live. After all, this was the alarm beside our wood stove which is a really good place to have a smoke alarm..

So in between chirps my mind ran through a lot of things. It really is incredible that my first instinct was to smash the offender.  I envisioned someone kayaking down the river and getting out and smashing down any signs that warned of dangerous water ahead… Hello.

But then the thought pattern went a little further. How easy is it to ignore little signs of danger ahead. As long as the water is deep and calm where I am now- and the air smoke free- it’s no fun to hear those words of warning… “Hey- are you thinking about the consequences of your choices?” Instead it’s a lot easier to smash those well-meaning words of wisdom…

Deep things to ponder in the early morning hours.  And after thoroughly stepping on my own toes- I drifted back to sleep..

Blessings on your week,

More from our mutts:

O for On site Inspection Agents 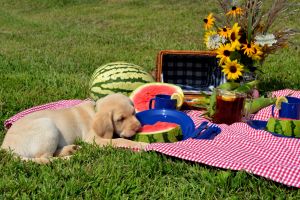 Q for Queen of the Backyard 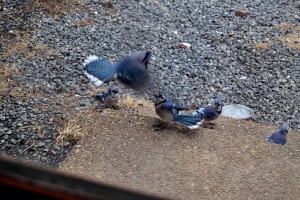