Finally I dozed off, but my siesta was short. Interrupted by the very audible distressed toddler several seats in front of me. I pried open my eyes and tried to figure out where she was sitting, and since I didn’t have anything more exciting to do- I watched with interest.

The blonde haired little cherub couldn’t have been more than 2, and apparently she hadn’t tuned into the fact that she was on a grand adventure heading across the planet at a rapid rate of speed. She was experiencing something that a lot of people will never experience. She was flying with her family, piercing through the clouds that caused a bit of a turbulent experience- but still- she was in good hands.

As I watched- her dad stood in the aisle trying to soothe his sobbing daughter. She calmed down and he threw her gently in the air. She laughed. He threw her a few more times- careful to just toss her enough to send her airborne, but not enough to hit her head on the plane’s ceiling. She loved it. It was obvious that she completely trusted the fact that he would catch her when she fell. For the moment she was all smiles.

I could see myself in that little girl. My time in Nicaragua was definitely an exhilarating experience. I could see My Heavenly Father gently tossing His Daughter into the air for the sheer rush of the experience. I smiled and laughed and just basked in the glory of His love in allowing me this adventure. The extra unexpected toss was when things worked out for us to travel into the mountains the last day I was there and visit the town where Delmar and Sarah (my cousin and her husband) are serving at the local hospital. What an adventure! The mountains were so rugged and they took us back a dirt road among the coffee fields to a short walk to a waterfalls. Amazing. La Dalia is beautiful. We ate supper with them and then Deb and I settled down on the back of the truck for the several hours to the CAM guesthouse where we spent the night. My heart was so full. What a loving Heavenly Father who allows so many blessings into my life. I watched the stars, chatted with Deb and just relaxed in My Father’s care. 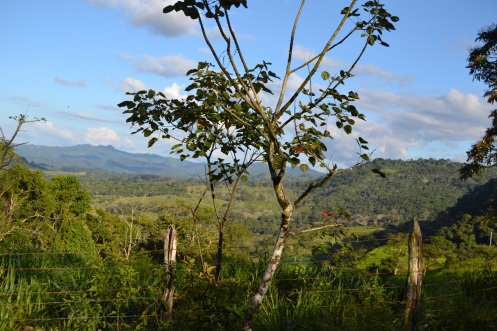 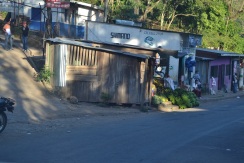 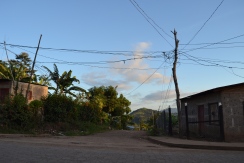 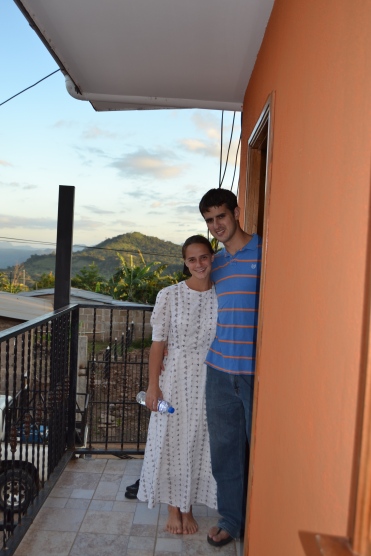 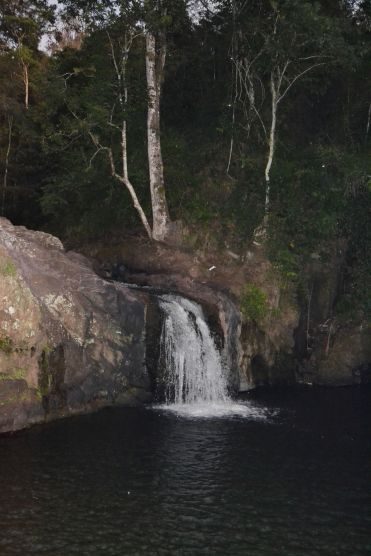 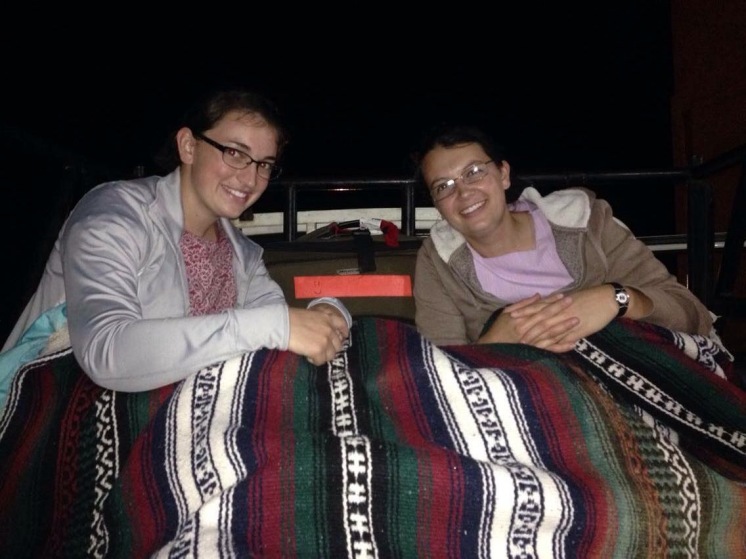 My little friend’s crying brought me back to reality. Her dad tried this and that- to calm her. He bounced her. He dug out her pacifier. Finally he put her head on his shoulder and cradled her in his arms. She quieted then, and rested in her father’s embrace.

As I was waiting to board the plane, I logged into my emails and read the devastating news that one of my dad’s best friends fight for life was over. I can’t believe it. I read the email about 3 times frantically wishing to see that somewhere I’d missed the words that left me with some hope. But there were none. Life had fled. My sorrow over leaving my brave little sister and her beautiful warm land coupled with grief at this news and snowballed as we flew along. Shock. Disbelief. Pain. Sorrow. The kind flight attendant handed me a stack of Coca-Cola American Air napkins and I cried.

I cried for all the memories. Rube had the quickest wit around and could make up a pun on the spot. Recently he had a procedure done to blast away a kidney stone that was bothering him for years. When he went back to meet the doctor he reported this conversation “Dr, Did you have a blast last week?” The Dr paused a bit “I think we both did”.

Rube was a family friend for forever as far as I know. He lived close by and when we were children it was traditional to have Little Ceasar’s pizza, peas, applesauce, and Reuben for supper. He eventually quit milking cows, and worked with us for years. So many memories. His record year of groundhog hunting, his trapping reports (even if it was just trapping mice in his house) His ability to talk to anyone anywhere. ” What do you say, Old Timer?” Every morning, Father’s phone would ring by 7:30, at least one time. Ol’ Brother Hostile.

Always the incredible optimist… like the time the chopper ran over the Farmer’s rooster, and Father called Rube and asked him to stop and put the rooster out of it’s misery. “I stopped and looked at him,” He reported “you smashed his one side flat, but the other side looked fine, so I let him go, I think he’s going to be alright” Or when he was running the graincart and would always run in the dust “That bean dust really gets in your eyes” he said “But it sure smells good”

Eventually his health deteriorated to where he no longer worked with us, but that didn’t keep him from following the harvest, especially at meal time. We’d always laugh and thank the farmer’s wife who send an extra meal to the field “This one’s for Rube” and when they didn’t realize he was on scene we’d offer him what we could spare or he’d just beg “Hey, Hoss, (not sure what all the history is with my dad and his “Hoss/Hostile” nicknames) that bbq sandwich smells amazing! If you have an extra one, Chuck is making bbq for the family tomorrow night, and I’d like to taste Mrs Knicely’s today and see how they compare.” 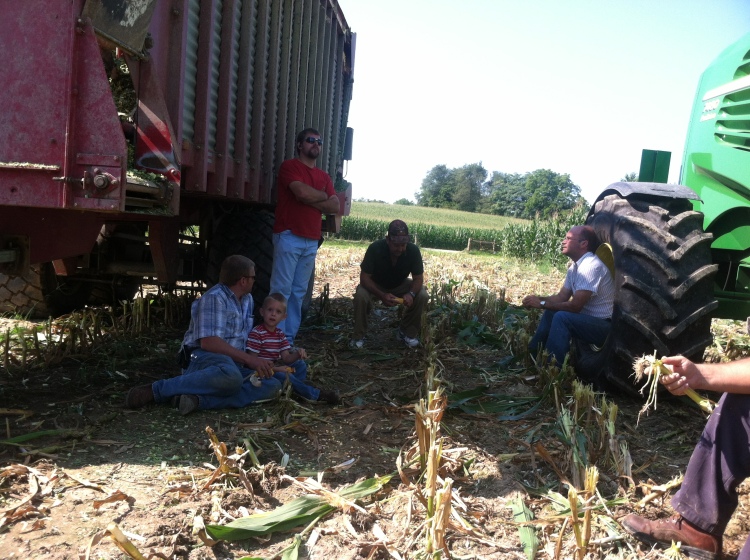 And no one has ever checked a crop so faithfully. Every day he’d make the 12 mile trek to his farm and check his land and make sure everything was ok. His land runs right beside the interstate and last year while I was running his beans, traffic on 81 came to a standstill. “Wow, Ken, I’m gonna tell everybody that you were running beans faster than the speed of traffic on 81.”  His excitement level during harvest was always through the roof. He’d ride the entire time and watch the yield monitor and exclaim… 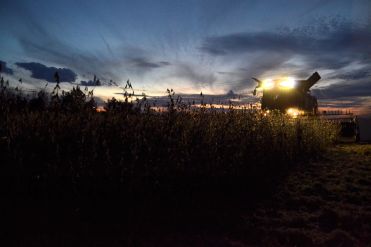 I cried for his pain. I cry for our loss . I can’t believe it’s over. It can’t be. As I watched that father cradle his little girl, the word to a song from my childhood surfaced:

I need to know the peace that comes, just knowing that you’re near

Hold me in Your arms, dear Lord, Never let me go

I’ll never make it on my own, won’t you carry me home”

“Blessed be the God, even the Father of our Lord Jesus Christ, the Father of mercies, and the God of all comfort; who comforteth us in all tribulation, that we may be able to comfort them which are in any trouble, by the comfort wherewith we ourselves are comforted of God…” 2 Cor 1:3-4