a worker who moves from place to place to do seasonal work.

Turmeric or tumeric (Curcuma longa) /ˈtərmərɪk/ or /ˈtjuːmərɪk/ or /ˈtuːmərɪk/[2] is a rhizomatous herbaceous perennial plant of the ginger family, Zingiberaceae.[3] It is native to southern Asia, requiring temperatures between 20 and 30 °C (68 and 86 °F) and a considerable amount of annual rainfall to thrive.[4] Plants are gathered annually for their rhizomes and propagated from some of those rhizomes in the following season.

I guess the best place to start is the beginning- once upon a time, I received a phone call that made me scratch my head a little. “Would you be interested in taking us to Florida in January for turmeric harvest?” She had me as soon as she said “Florida”, but what on earth is turmeric and how is it harvested?

Fast forward 2 months, and our jovial band of 5 ladies were southern Florida bound. We made the 915 mile trek without incident and were transported back to our childhood thanks to an audio series of Pollyanna- so many reasons to be glad. 🙂

Our destination was White Rabbit Organic Farm, where our base was the second floor of this big barn- which was very comfortable living quarters. (pictured is the nearest neighbor- a goat that lived downstairs) 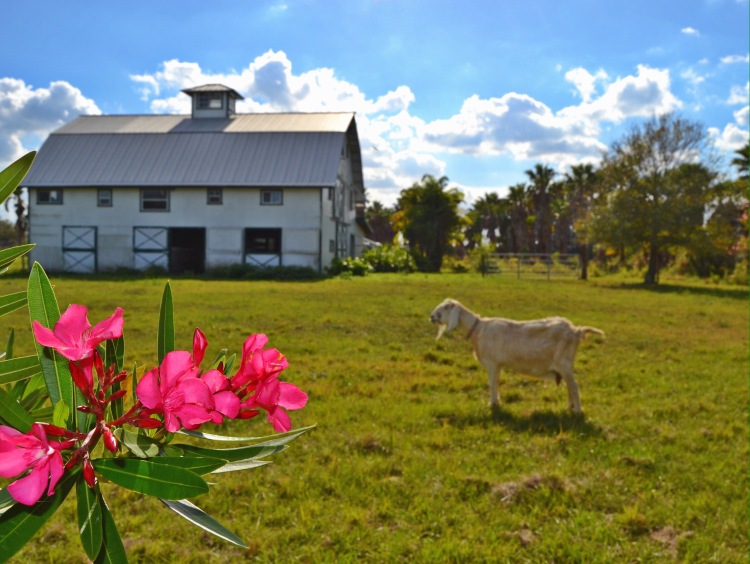 We had the free reign of the house, except that they left an entertainment committee in charge of our gang… Bijou (French for jewel) was a 23-year-old cockatoo that stole the show and possible damaged a bit of hearing… She was a very endearing bird that seemed determined to help me get over my fear of fowl. After the week was up, we had made some progress, but there were no good-bye hugs, to state it mildly. 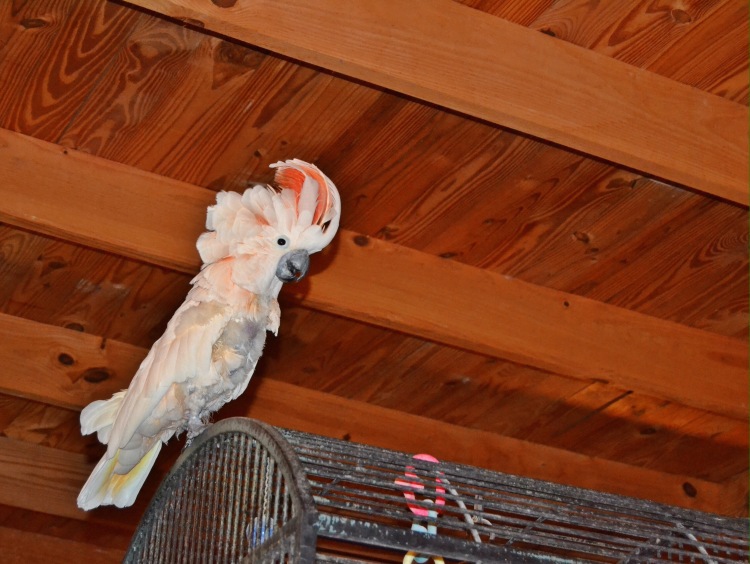 And we were 10 miles from the Atlantic. No more words needed.

But anyhow, all the preliminaries aside- we were summoned to harvest. There is a lot of info on the benifit of turmeric right now, maybe you’ve noticed, it’s kind the bandwagon thing. Don’t get me wrong, I’m sure there are health benefits, but I’m a bit skeptical that it eliminates all arthritis, Alzheimer, AND cancer… But that’s great if it does.

Our product was heading to a whole foods market, where I understand it’s popular as a juice…

So Step One: The plant grows to be about 3 feet tall, and was dying down when the farmer’s daughter came through on their 1655 Oliver and dug the plant- we were interested in the root. 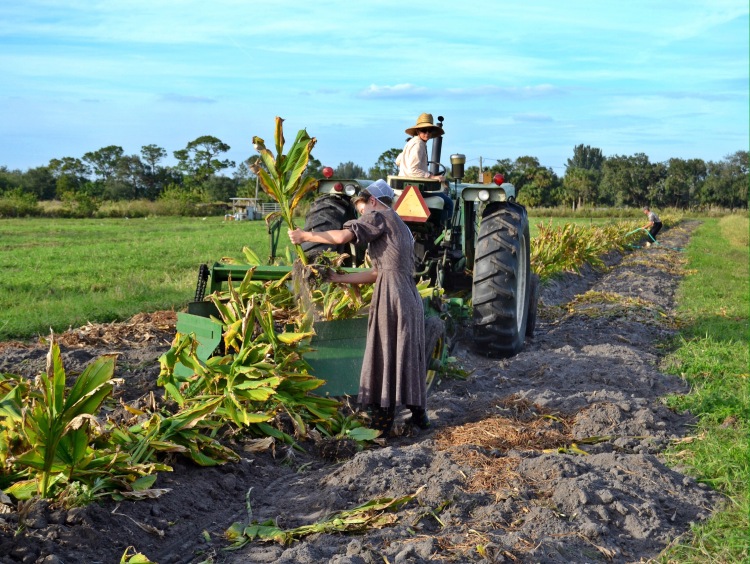 Step Two: The plant was then placed on the washing table, where the tops were cut off and the roots received their first bath. (pic of the harvest crew)

The product is then wheelbarrowed in to the next station…

Step Three is mainly where I was joined in the efforts… Here we separated the original bulb (the mother) from the new growth, trimmed the roots off and sorted the fingers for shipping.

Here is where we strengthened friendships and fought the common cold that threatened to kill a number of our group. We also did an intense nature study:

We solved a few world issues, and even prevented a murder. We discovered that a lizard can lose multiple parts of his tail. Wilda rescued the brown one from the jaws of death of the green-eyed monster. He thanked her by kicking off a part of his tail, beating a hasty retreat. The next day, she met him again, and recognized him by his stub tail… And was amazed when he kicked off the second section of his tail and left it writhing in the dust as he scurried for greener pastures… 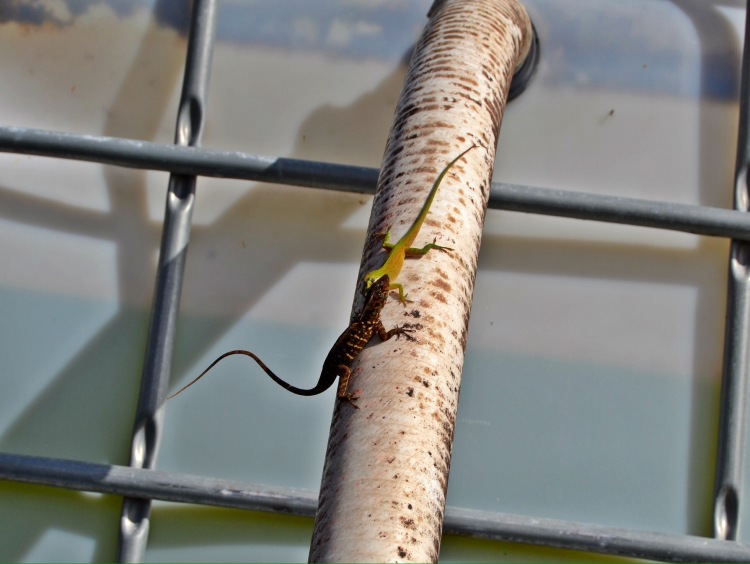 We basked in the glorious southern Florida sun and really it was the perfect temp, even if at one point I thought for sure I saw a mirage- a Dr Pepper with my name on it. The next day, my mirage came true 🙂 There it stood on the final washing table (Step Four) in all it’s beauty- I had to blink several times to make sure I was seeing correctly. (I blame the cold for a semi foggy brain)

Step Five: the finished product- drying before being boxed for market. In the 4.5 days we worked we had approximately 1500 lbs ready to be shipped.

The only rain cloud on our project was that we didn’t finish the job as we’d hoped, but the boss’s wife assured us that in India, it takes 100 workers to harvest an acre/day. Small wonder our group didn’t suceed in the alloted time.

As the sun set, and I trudged for the house in my rubber boots, occasionally I found myself lost in an imaginary world of a migrant worker- depending on the harvest in various communities and the generosity of the farmer to exist. 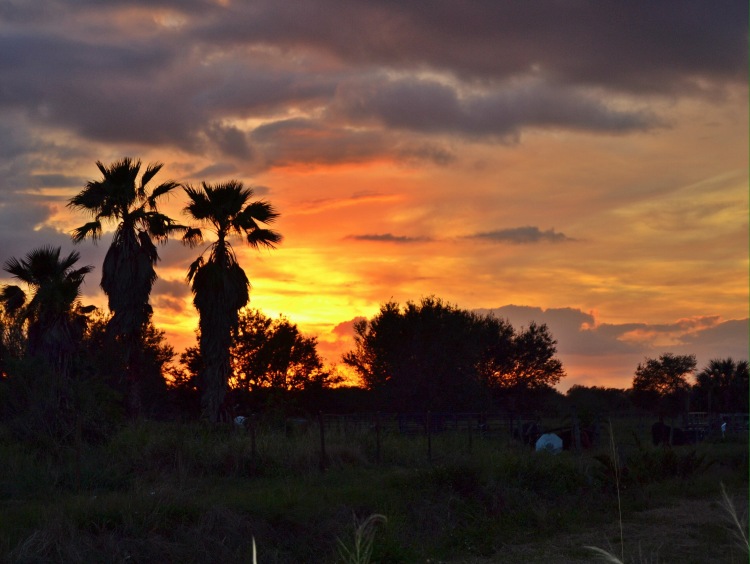 It’s not too hard for me to relate- the love of the land, the addiction of the fresh air and sunshine: and the challenge of producing another crop.  No, these are not foreign to me at all…

And then, we loaded up in our van, and waved cheerfully out the window, as we headed on for the next adventure…

My God who promises rain and sunshine, seed-time and harvest, is a Good God!

The icing on the cake was a morning kayak tour through the Indian River Lagoon, where our very knowledgeable tour guide had us paddling right through the middle of a dolphin feeding grounds which we watched amazed… And I got practically splashed by a little shark. And she had us lick the leaves of the mangrove tree. These hearty plants have their own salt filtering system which sends the salt onto the leaves, where it dries in the sunshine, and falls from the plant. God’s World is Wonderful.

3 thoughts on “Experiencing the Migrant Work of Turmeric Harvest”