To our friends scattered to and fro,

When I took on the job of becoming farm manager, “secretary” was not in the fine print. I read and reread the contract before I signed it just to be sure. 🐾 Nope, not mentioned. However, it did say, that as manager, my job was “overseeing the afore mentioned tasks of the outfit” and since KH has clearly fallen off the face of the earth (at least she sends pics 🤔)

I will henceforth do my best at bringing you up to speed on the goings on around here.

And well, since I’m the one talking, I guess we will start-hehe-with me.

I, Detroit Snappenbarker Mendoza, have kept relentlessly prevailing on the harvest around here. So I let Eldon and Deborah and Kendra (whenever she’s around 🙄) help just enough to make them feel needed… but I must say, we are coming along well, and Lord willing, we could be done within the next week. Which is a good thing.

The last time I sent Eldon to check the amount of storage left in the grain bins, he reported “its starting to Philip Knicely” which is code for “the bins are full.” Also Philip Knicely is a neighbor, and maybe his bins are full too. I don’t know. I saw him running soybeans recently and gave him a stout “barking at” for sending soybean dust over into my field. Also he parked his pickup within my view without clearing it with homeland security. Ummm 🤔

Rolo: she’s good. Well actually she’s kinda depressed. Her puppies have all left and Deborah is too cheap to get her a phone so she can keep up with them on social media. You’d think after the amount of money she brought in, she could afford such a necessary thing. But no. It really is a good thing for parents to be friends with their children on social media. But what do I know? Like somebody dear to me often says “old maids raise the best children” I guess that’s true about bachelor dogs too 😜 This is one of her pups- Mr Remington.

River: Rolo and I are loving having her here. One really neat thing about having a puppy here is that she is automatically accused whenever something new is shredded. And face it-there’s a reason for those accusations. But I think stress can drive even a sane dog to shredding things. Poor pup watches in the door as her mom is trying to get better and it’s stressful on all of us. Em got a picture of her knee the last time she visited the Doctor.

River gave me a full report and threw around a bunch of words that neither of us understood, but apparently Em isn’t able to bend her knee like the doctor wants her to. I’m no doctor, but it looks to me like the screws are too big for her bone. Hand me a screwdriver, or a cordless drill, and I’ll have that one remedied in a hurry!

The Dairy Dogs: the German Shepherds of our family have taken on a new position. A position that Rolo and I filled quite well when we lived on Paradise Lane, but this is new territory for them. They’ve become game wardens. Julia was out in their new deer blind, so Kalila and Dora went out to pay a friendly visit and make sure Julia was abiding by the rules. They waited patiently until the deer came out of the woods, then they barked like mad to let her know deer were on the move.

Their interview with the Coyote Brothers was noteworthy. Who is surprised that they were running on some sort of shady license? The dogs gave them such a stern warning that it brought the farmer with his spotlight. The confrontation took place right there in the middle of the front yard- two dogs vs two coyotes. Good work, pals! We stand for truth on this ranch. 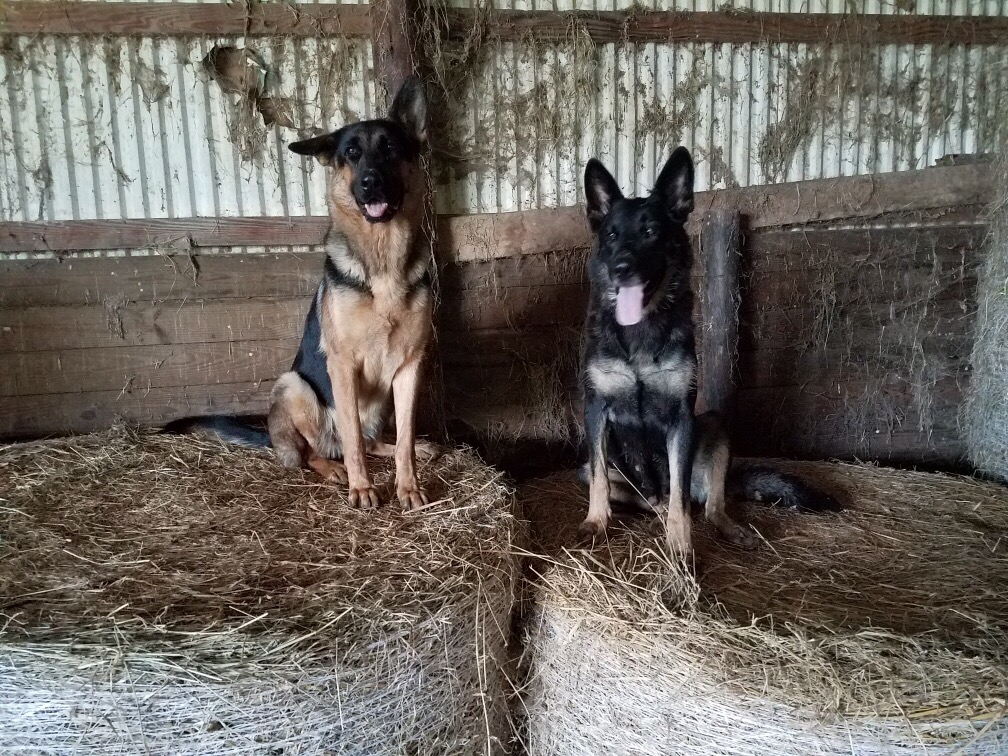 And that’s about all I have to say about that. We enter the season of thanksgiving with full hearts. Life has some difficult things right now, but we have much to be thankful for.

Especially that we have a fearless and capable farm manager at the helm of this ship.

Detroit Snappenbarker Mendoza for the rest of the gang

One thought on “Farm Manager’s Report 🐾”