I think jealousy is the root of the problem.

In fact I’m fairly confident about this. Allow me to present my case: I’m Detroit Snappenbarker Mendoza, farm manager. And I think that’s what got us off on the wrong foot. Well, that and the fact that the Horst gals refer to me as “the best ol boy”. It eats at them. And I won’t say that I don’t understand it, but it doesn’t change the fact: I was farm manager before any of the brother in laws showed up.

And I’ve overheard the exact same conversation with all of them “yeh he’s a nice enough dog, but I don’t think he’s very smart.” And while the girls protest, they never look at me quite the same. Except Ken- her loyalties have yet to be tested, so she doesn’t really count.

I faithfully soldier on. This farm depends on me.

For instance: I could tell that it was going to be left up to Rolo and I even before I noticed the pile of “OBX bound” boxes by the front door. Plus it happens every August, they go away and vacate- and leave the place in our capable hands, er I mean paws. 🐾 But this time- I sensed trouble on the horizon. And no matter how hard I scrubbed my face on the grass in the backyard, I couldn’t shake it. Rolo saw me and tried the same thing. And we ended up in similar predicaments. Flaming red irritated eyeballs, and still that dark cloud on the horizon. The family noticed the red eyes, but not the cloud. So Ken rushed to town and bought eyedrops and every time I turn my back, someone is sneaking up on me and shooting drops into my eyes. Actually make that 2 somebody’s I can easily outsmart/outrun just 1 somebody (hehe take that “he’s not very intelligent” naysaying boys 🙄)

So basically part of the fam rushed off on vacation leaving instructions for the ones vacating later to “check on the dogs” Good thing it was 2 of them, because I wasn’t about to take those drops sitting down. They tried to convince to come into the house, mind you, to take my meds. Nothing doing. They tried to trap me in the garage and I was spinning-wheels-backwards out the door when Deb caught a leg and I was hung. Dumb drops.

But then the dark clouds on the horizon came closer and closer and closer. As night fell on the Homefront, it became dark. So black dark that I couldn’t even see a whisker in front of my face. Rolo was beside me whimpering and carrying on. I tried to be brave and reassure her, but there was something dreadfully wrong. And we were facing it all alone. We survived that dark,dark night, but the rising of the sun did nothing to shake that cold black feeling.

Way off in the distance, I could hear a little brown pickup with a little blonde pup with the hammer down, heading up our road. A small ray of sunshine began to pierce the dark cloud. Up the lane shot Em and River. Rolo and I fell all over ourselves welcoming them. Help had arrived. We were saved! I kept a safe distance because I wasn’t about to hang around for more eye drops, and Em went in to casually open the garage door….

And it wouldn’t work. Sometime in the past 24 hours, the current had quit and there was our entire place becoming room temperature. Eye drops and Veterinarian assignments were forgotten, as Em changed into Supermanwoman/electrician and between both of us, order and current was restored to the place.

See why they keep me around? Admittedly, I’d have been ecstatic to help them empty all those freezers once they returned from vacation, but I chose the high road… 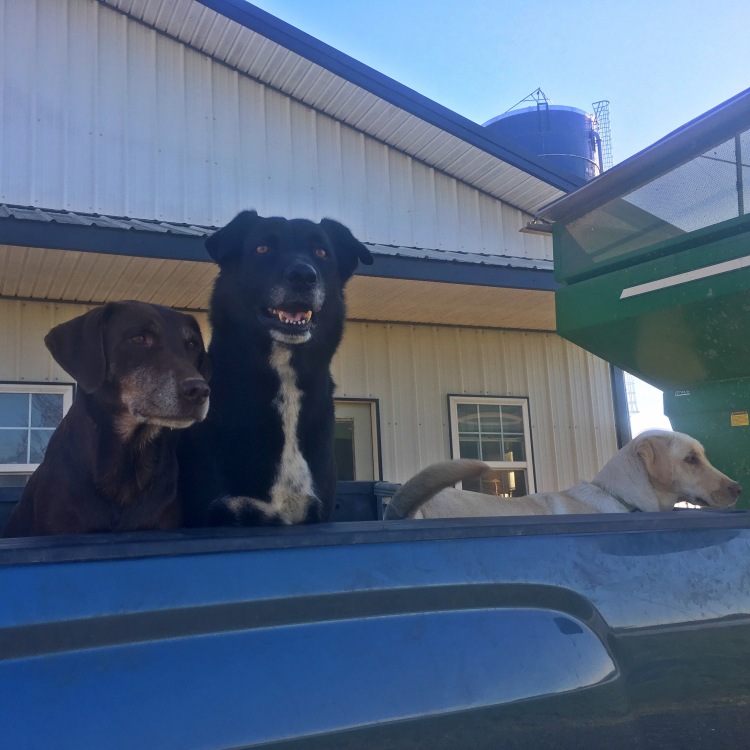 I remain, the ever faithful farm manager,

2 thoughts on “A dog’s premonition 🐾”