The last several weeks have found me staring down the row instead of the road. Tall tasseling corn, a combination of dust and silage, and the roar of a John Deere forage harvestor has filled my days and my heart to the very brink. Working day and night with my family and our harvest crew has been exactly what I needed. My feet have been firmly planted in the Valley and I have loved every single second. 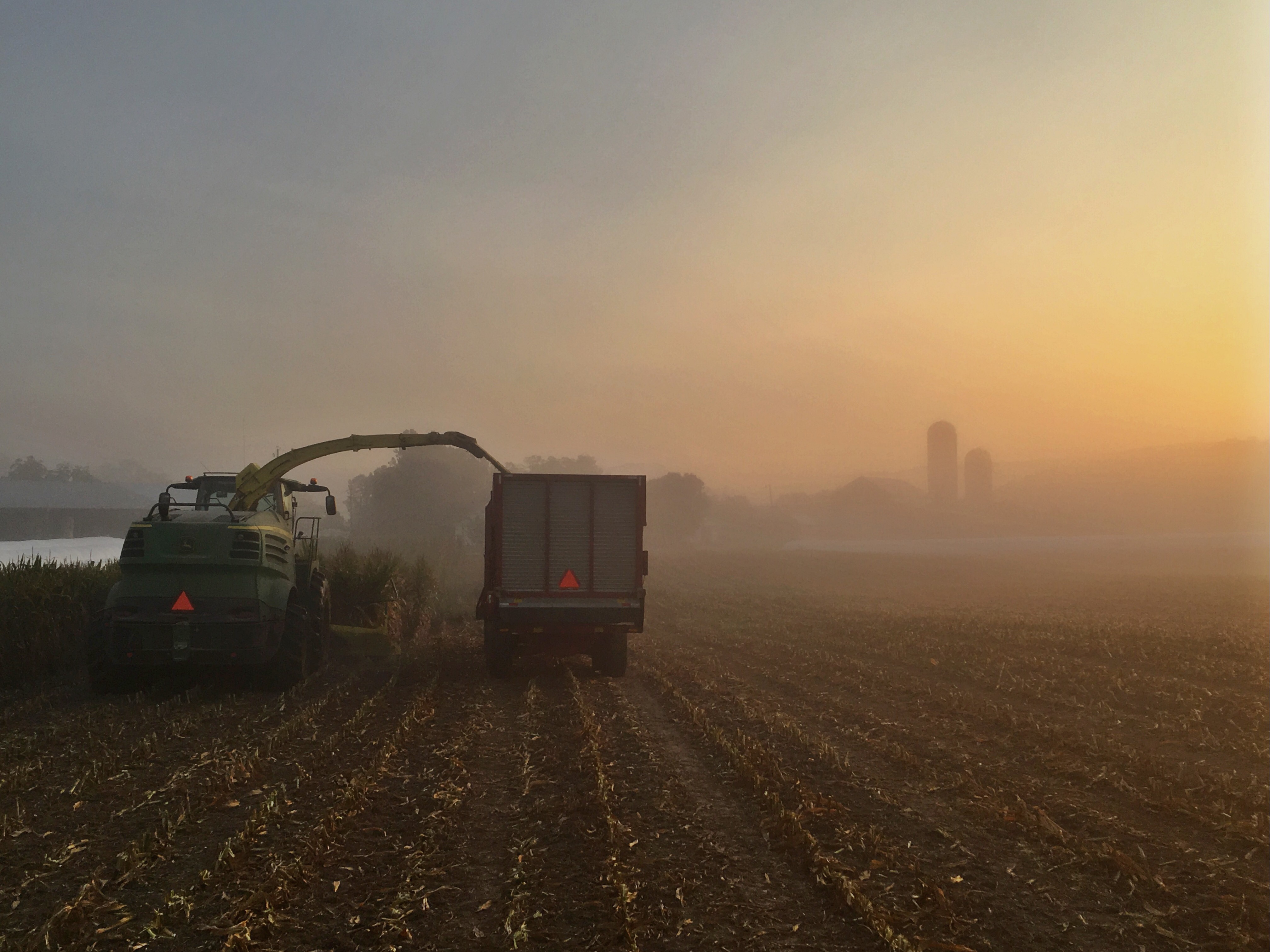 But the opportunity to travel has presented itself again, so I hung up my work boots, laced up my tennis shoes and stared at the dotted line once more.

Thanks to the fact that I missed 78 days of my freshman year of high school battling mono, I missed the chance to visit Williamsburg, so this was a new experience for me.

We trudged down the cobbled streets, stopping often, asking innumerable questions, and learned a lot.

The staff did a wonderful job at placing us back in the 1770s when the colony was bulking under the heavy taxation placed on them by his majesty and the homeland, England. The huge risk factor and the uncertainty of that era stood out to me like never before. 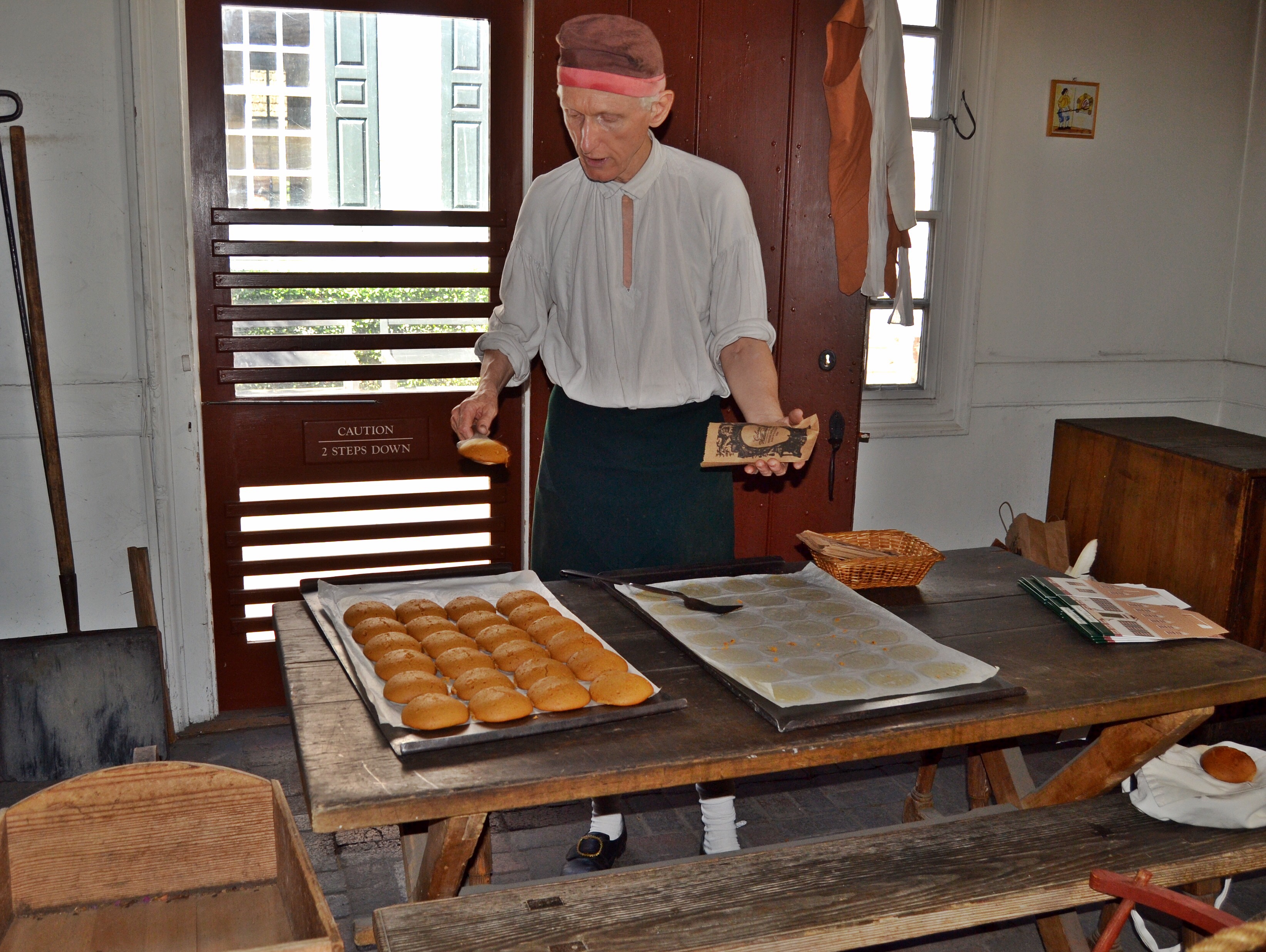 I munched on a brick oven fired ginger cake, and pondered. 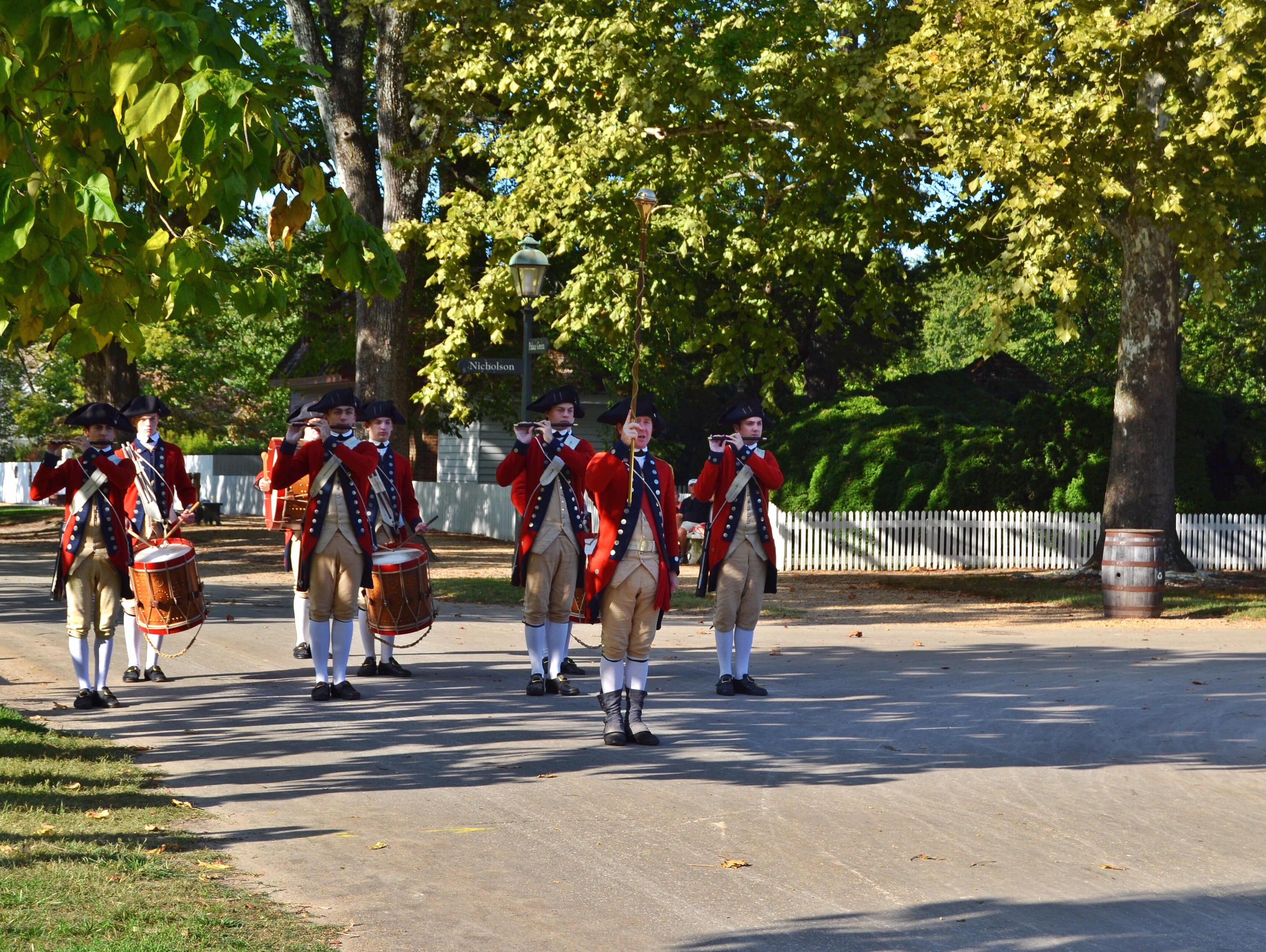 The haunting memory of the fife and drum danced through my dreams that night.

The next day found us at a much earlier era-Jamestown and the 1600s. We toured all through the Indian village and met with the history of Pocahontas. She was the daughter of a powerful Powhatan Indian chief. The legend goes that Captain John Smith was captured and just as his captors raised the war club to execute him, the impulsive 12 year old rushed in and shielded him from death. Later she found herself a captive of the colonists, converted to Christianity and chose to stay with the colony, marrying John Rolfe.

As a child I was fascinated by her story and for whatever reason fancied myself a kindred spirit. Probably because I know all about impulsive decisions. 🙈 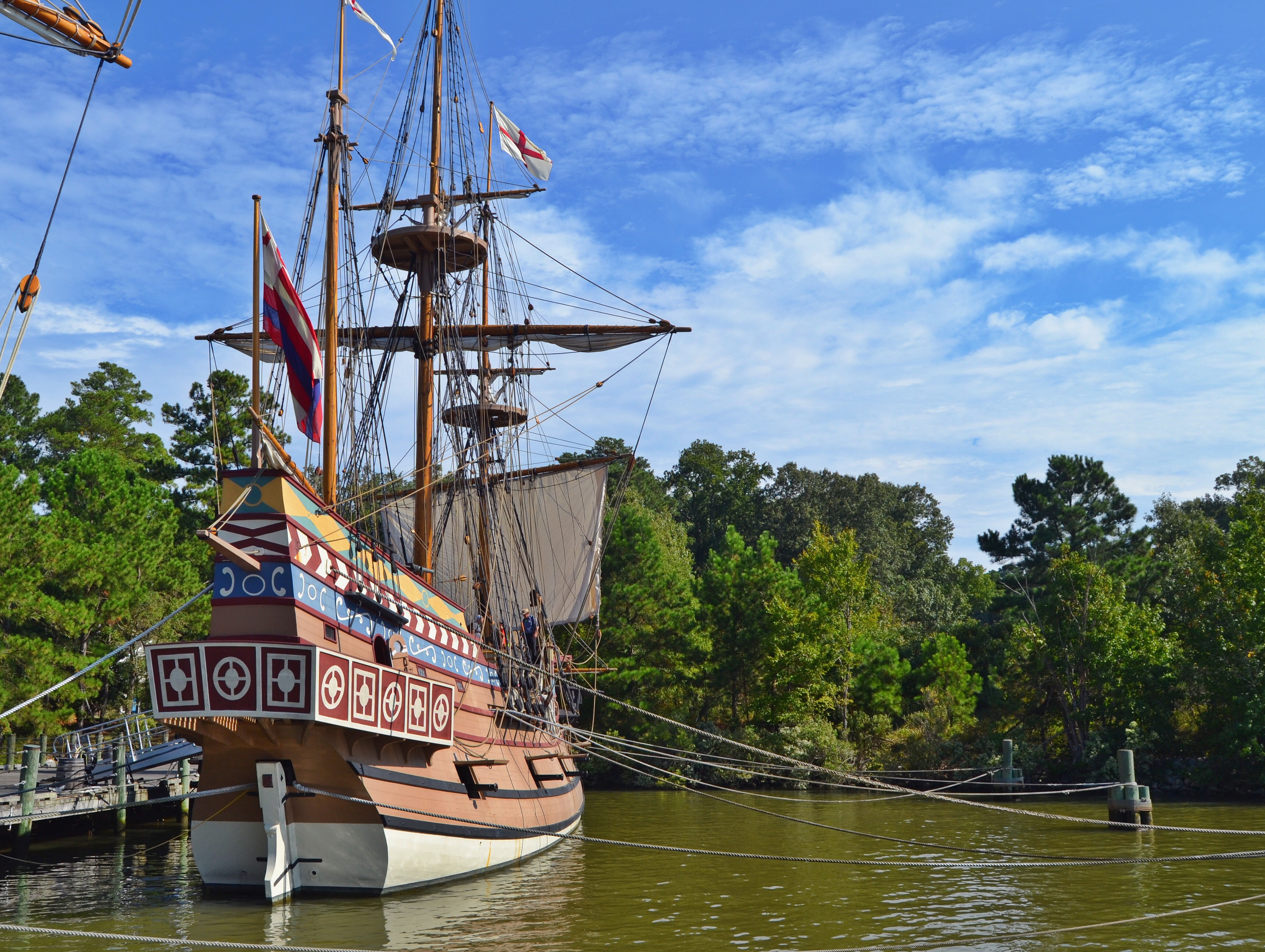 The “Susan Constant” is a replica of the original ships who spent 4.5 months at sea with 71 men heading to the new world. The size of everything including the tiny kitchen, the 5′ 6″ bed (there were only 12(?) bunks on board total) the claustrophobia content of the mid deck when you’re stranded there for a third of a year…

And the glassbowing: I watched spellbound as sand, 2 types of ash and lime (at 1000 degrees) changed forms. And under the skilled hands of a glass-smith turned from an orange glob into a blue juice glass. I went to purchase one and was mildly horrified when I asked the cashier how fragile they were and she demonstrated their durability by pounding my glass on her wooden checkout counter. But all survived and she made a sale.

And lastly- I was amazed by all the coats of armor at the Jamestown fort. I guess I never considered how close to Medieval times 1600s was. But then as I wandered through the one home, the full body armor made perfect sense. In fact there remains this question in my mind to this day: was the armor era appropriate- OR was it placed there strategically to keep tourists from being flopped by the real live rooster residing on the one cot? I guess we will never know-I beat a hasty retreat.

History is fascinating. I thoroughly enjoy learning from the past: the good, the bad, the ugly. And it’s all there-painful victories, uncertainties, and the outcome. I think we need the reminders. Life was hard. It was unfair. Those people made decisions to the best of their abilities and life moved on. Life isn’t easy today. There are injustices, and mistakes. And choices being made that will be talked about for years to come-should the world stand.

Yet the faithfulness of God-who sustained his people then and today endures forever.

Ladies and gentlemen, the story you are about to read is true. The names have been changed to protect the innocent.

Mrs W hummed to herself as she hurried about the kitchen. Tonight called for a feast. She and Mr W had recently purchased land, all the permits had gone thru AND the excavator had just called to say that he would arrive on Monday.

“It sure is nice that the chopping crew finished up in good time so Father can move the bulldozer and his latest obsession- an 8760 and pan over to our place!”

Mrs W paused in her supper prep. J and C were the kind of comfortable friends that stopped by occasionally and made themselves at home. They were the kind of friends to have. She decided to add stuffed peppers to her supper menu of steak, corn on the cob, company potatoes… Tonight was going to be fun!

The guests arrived and everyone settled into supper and all was at peace in the world.

Suddenly a phone call interrupted the meal- Father was slaving away moving equipment and needed some assistance. Since Mr W and Joe were closest to done, they excused themselves and rocketed out the door, leaving the rest of the meal and the dishes to Em and Cole.

The writer was part of the bulldozer moving crew and noticed after those guys arrived Mrs W was sending them at lot of messages in a short amount of time.

“Cole must have thought that stuffed pepper was hot, he can’t handle anything apparently, he’s even drinking milk” Joe explained

“That baby” said Mr W, who loved anything hot

There was no small amount of harassing once Cole and Mrs W arrived. “I feel a little better now, but my stomach burns.” He said “my mouth was completely on fire.”

“I got that pepper plant free somewhere,” explained Mrs W “I wonder what kind it is.” 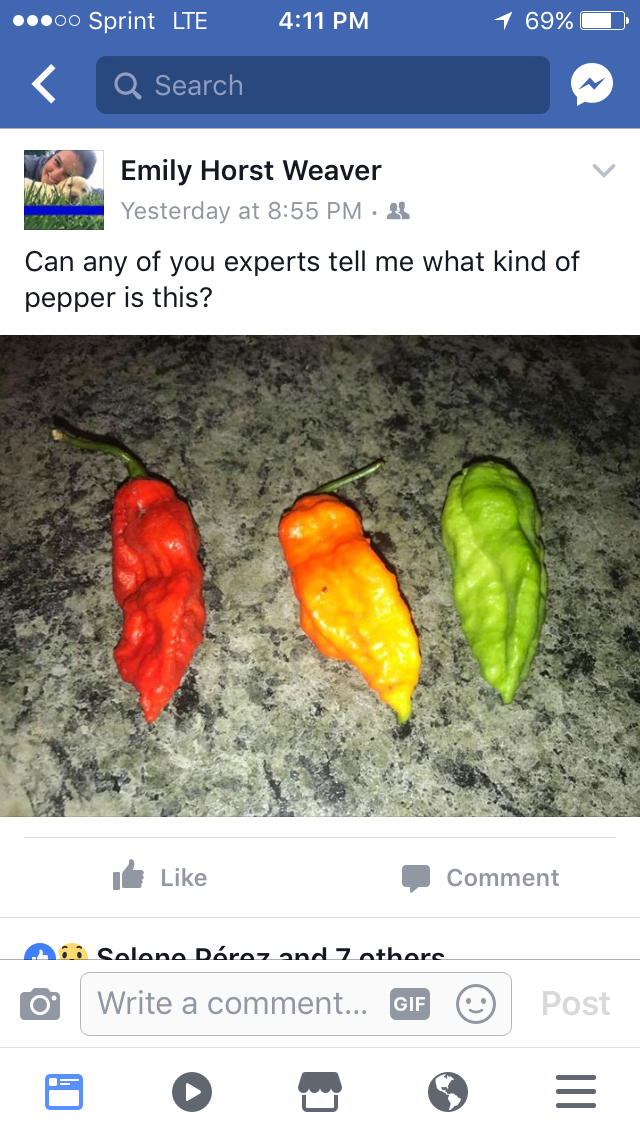 Later that evening, a small Facebook update appeared in my newsfeed, along with a number of comments.

Upon returning home, Mr W had tried a small piece of the mystery pepper, and even with his incredible heat tolerance-the poor man still got in trouble.

The report came that while Mr W writhed in pain and got literally sick, the Mrs rolled on the ground in laughter, and Cole rushed around assisting the poor guy- bringing him a gallon of sweet tea and the rest of the milk in the house “help him, he’s suffering!”

There are several morals to this tale:

Thanks Kerry and Em for sharing your hilarious episode with me!

Notice: Stuffed peppers at our place tonight if anyone is brave enough- bring your own milk products 😂

A merry heart does so much good.